More Stories about Spaceships and Cancer by Casper Kelly 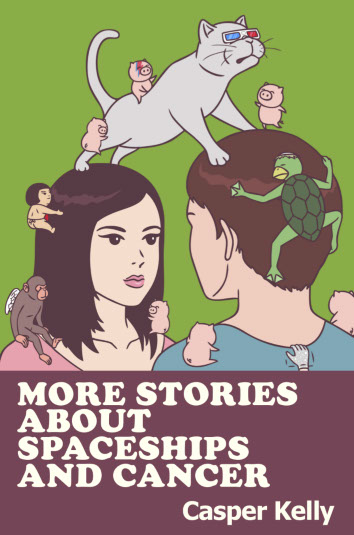 The first thing that stands out about Casper Kelly’s collection, other than the title, is the Table of Contents, which is actually a humorous flash piece that begins, “Help, I’m Trapped in a Table of Contents.” Kelly continues this quirky tone with an Introduction that questions why anyone would read a short story collection from an unknown writer. Short story collections, Kelly says, aren’t important or cool, like they once were:

…they’re more like modern poetry, i.e. they’re made because that’s what civilized societies are supposed to do but people don’t really care about them anymore, people don’t really read them…if they’re read at all it’s out of duty, like eating broccoli to get your vitamin A or whatever…vitamins broccoli provides.

It’s an interesting start and sets up a series of “Intermissions” that appear between each story in an attempt to link them together.

“The Sensitive Person’s Joke Book” is the first story proper. Kelly takes familiar joke premises and weaves them into a surreal, surprisingly poignant story. It begins:

A man and a duck walk into a bar.

The bartender replies, “I was talking to the duck.”

Kelly explodes this joke as the man then ponders the cavalier insult. Kelly rolls other familiar tropes into the story, deconstructing them hilariously and managing to tell a very funny and touching story while also examining certain social mores such as gender roles and stereotypes. The story is inventive and ingenious; worth the price of the book just by itself.

Kelly plays with other conventions. In “Taking a Shit in the Future,” he riffs on the dystopia stories that are so popular. A new procedure eliminates bowel movements by sublimating the waste into some sort of waves. The piece is reminiscent of Vonnegut’s early stories because of its humor and unique take on the genre. The narrator resists the procedure, and when he finally undergoes it, he’s sure something nefarious will happen (narrative causality demands it!). He imagines plots but makes no progress. An artist sets up The Shitting Museum, where people go to experience a kind of approximation of defecation. Everything has been improved; there’s no room for error anymore. It doesn’t actually sound so bad.

Similarly, “Large Breasted Ninjas of Altair Seven” tells the story of a world in which death has pretty much disappeared, but the alienation between the old and the young remains. The very old survive by having their brains hooked up to a kind of virtual reality, where they can do or be whatever they want. Their friends and relatives can visit (though the question is raised as to whether this is actually part of the virtual world). Though it sounds somewhat disturbing, Kelly presents this scenario in such a way as to question whether it’s truly that horrible; he’s asking, isn’t a virtual life still better than death?

“Sneezy” is a second person retelling of the Disney version of “Snow White” from the point of view of the dwarf, Sneezy. Sneezy is madly in love with Snow White. The second person POV adds a nice sense of desperation to Sneezy’s lovelorn confession. Kelly’s language is moving and intense in this story. For example, he describes Snow White’s voice as “tast[ing] like fresh milk to my ears.” They concoct a plan to run away, but are foiled when Snow White eats the poisoned apple. Again, Kelly manages to take an absurd story and make it both affecting and beautiful.

“Frequently Asked Questions” is an exchange of emails intended for the customer service department of a bank, sent from a customer who is being attacked by an ATM with an axe. As one can imagine, it’s a humorous story presented in an interesting way. “Sex Fantasies at Work” is a long story in which a man explains his increasingly hilarious but also depressingly self-hating fantasies to his shrink. Again, Kelly explodes sci-fi conventions in an entertaining way. As the man becomes more and more enmeshed in his fantasies, a world opens up which throws into question the reality of the story.

Kelly’s writing is clean and well-constructed. The stories flow well and are each so different that they actually complement each other. The only hang-up I had with the collection was the intermissions, which weren’t on the level of the stories (though they admit to being weaker, in a sort of meta-ironic way). Remember when The Simpsons introduced the surf-boarding dog, Poochie, with his catch-phrases and complete pandering? Kelly plays with similar ideas in the Intermissions, but they never really coalesce into anything worthwhile, possibly because he spends so much energy mocking their existence. Yes, the reader says, we understand that these are silly; so why are we reading them? But the stories are so good, it doesn’t matter.

Cortney Bledsoe was born and raised on a catfish farm in eastern Arkansas. He received his Bachelor’s Degree in English with a focus on Creative Writing at the University of Arkansas, where he went on to study with the MFA Playwrights program. He has poems, essays, and short stories published or forthcoming in Apalachee Quarterly, The Arkansas Literary Forum, The Blue Collar Review, Hobart Pulp, Mobius, Nimrod, Story South and other journals.